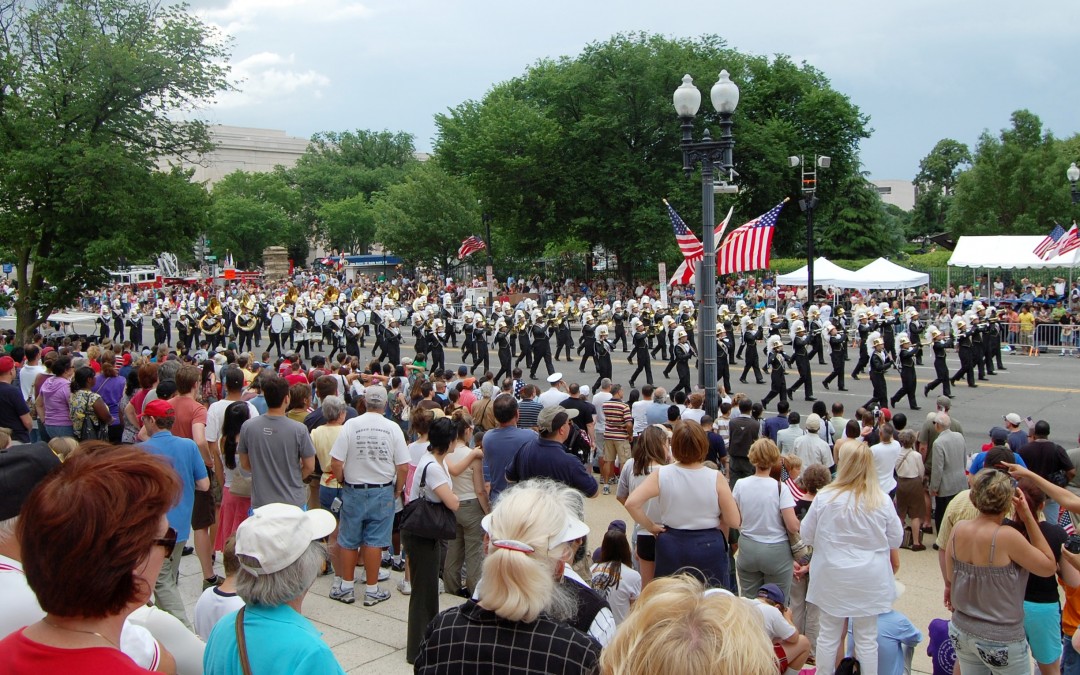 Happy Fourth of July Weekend from MCI Headquarters! We are incredibly excited about all of the Independence Day festivities about to happen over the weekend in Washington, D.C., and we hope that YOU can join us and be a part of it all in our nation’s capital!

America's 2015 National Independence Day Parade, co-sponsored by the National Park Service and Diversified Events, takes place annually on the National Mall. It consists of invited bands, fife and drum corps, floats, military and specialty units, giant balloons, equestrian, drill teams, VIP's, national dignitaries, and celebrity participants. The Parade is a major national event which seeks to draw the attention of Americans to the real meaning for the holiday. It is a patriotic, flag-waving, red white and blue celebration of America's birthday!

With the parade just a few days away, we wanted to present you with an overview of the day's events as well as some logistical information helpful for parade spectators.

First of all, we would like to welcome all 17 school marching bands who will be coming from all over, representing their hometowns, their home states, and in one case, their home country. These bands have prepared tirelessly for the parade for months, and are ready to show everything they have on the big day!

We are pleased to welcome one international band in the parade.  This band is Småbispan, the Bispehaugen School Marching Band from Trondheim, Norway, marching with 88 musicians.  This band originally planned to visit the U.S. in 1964 and  had been invited by Jacqueline Kennedy’s social secretary to visit the White House.  They canceled this tour due to the assassination of President John F. Kennedy.  Now, more than 50 years later – they are finally making that visit.

The parade kicks off at 11:45am. Come out early to stake your spot along the parade route, as thousands of onlookers are expected this year!  You can start securing your spots on the parade route at 10:00am.  Food and water are allowed. Food vendors will be available; however, long lines are expected.  More info can be found here: http://dc.about.com/od/4thofjuly/a/IndDayParade.htm

Regarding security checkpoints, parking restrictions, road closures, public transportation and more info that will help you navigate your day around the Mall, please go here:
http://dc.about.com/od/4thofjuly/a/GettingtoMall.htm

Follow us on Facebook! We'll be continually giving updates on our page leading up to the parade, as well as live updates during the parade.

Along with the parade, you can enjoy these additional activities in and around Washington, D.C. this July 4:

Independence Day at the National Archives

View the annual reading of the Declaration of Independence from the steps of the building that houses the original document.

This annual event celebrates the diversity of cultures around the world, and includes music and dance performances, arts and crafts demonstrations, and more.  The theme of the 2015 program will be “Perú: Pachamama” and will highlight the diversity of Peruvian and Peruvian American communities.  Admission is free.

A Capitol Fourth Concert on the West Lawn of the U.S. Capitol

Headliners for this year's PBS broadcast include Barry Manilow, Bradley Whitford, Alabama, Nicole Scherzinger, KC and The Sunshine Band, and many more, culminating in a thrilling National Symphony performance.

Fourth of July Fireworks at the National Mall

The country's most spectacular fireworks display!

In response to a large amount of inquiries from parade spectators, the parade will receive a lot of media coverage from various national and local stations, but there is no live telecast. Sponsorship for this national event is difficult with certain federal restrictions in place, and therefore any broadcast - whether it is television, radio, or online streaming - is not a possibility.  We anticipate this will change with future parade performances, but this will be the case for the 2015 event.  However, the entire parade will be video recorded, and we will be able to have that video available for online viewing at a later date.  Further, copies of the parade video will be sent to directors of all participating bands, who may then be able to duplicate and distribute the recording to all interested parties. This video will be available within several weeks following the parade.

For further information about the parade, please visit the official parade website. Happy Fourth of July to all, and we look forward to seeing you at the parade!