Col. Arnald D. Gabriel Recognized for a Lifetime of Service 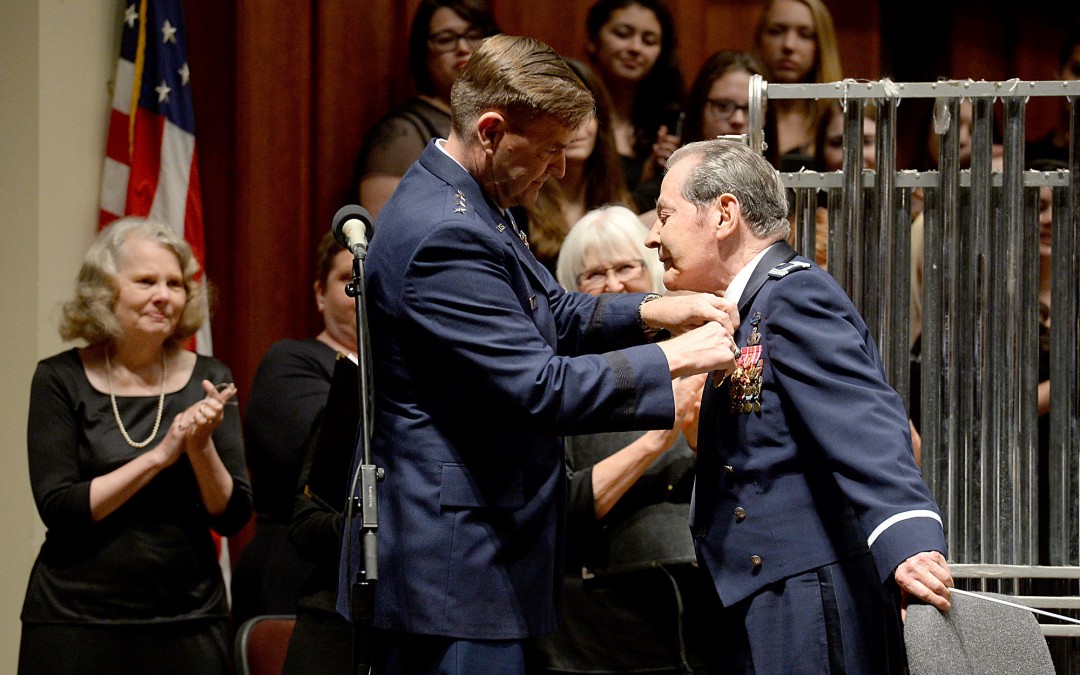 How many ways can one appreciate a man who so completely embodies the spirit, drive, and passion of America's Greatest Generation as Col. Arnald D. Gabriel?  Answer: Not enough. Col. Gabriel served as a combat machine gunner with the United States Army's 29th Infantry Division in Europe during World War II. For his service, he received two Bronze Star medals, the Combat Infantry Badge, and the French Croix de Guerre. Following the war, Col. Gabriel earned both Bachelor and Master of Science degrees in Music Education from Ithaca College.  He served as Commander/Conductor of the United States Air Force Band, Symphony Orchestra, and Singing Sergeants, from 1964 to 1985.  In 1990, he was named the first Conductor Emeritus of the Air Force Band. Col. Gabriel served on the faculty of George Mason University from 1985 to 1995, with duties that included serving as conductor of the George Mason University Symphony Orchestra and as Chairman of the Department of Music for eight of those years.  In recognition of his ten years service to the university, he was named Professor Emeritus of Music. Turning 90 years old this week, Col. Gabriel continues to conduct and work with music ensembles around the country at a pace that would be considered energetic by men half his age.  His knowledge of music scores - as is often evidenced by his ability to not only conduct on the podium without a music score, but also remember the most nuanced of rehearsal markings - is unparalleled.  His conducting is as fresh and energetic as it was during his many years conducting the Air Force Band. Our experience with Col. Gabriel goes back a number of years, having conducted numerous band festivals - including a very large, 300-piece band at the Air Force Memorial on an extraordinarily hot, steamy day in 2010 - and having served as clinician to seemingly countless bands visiting Washington, D.C. with Music Celebrations. Far and away our most memorable and emotional experience with him came last summer in France during the 70th anniversary commemoration of D-Day.  He conducted the D-Day 70 Memorial Wind Band in concerts in Paris, on June 4, and next to the memorial sculpture "Les Braves" in Saint-Laurent-sur-Mer in Normandy, on June 6, to commemorate the 70th Anniversary of the 1944 Allied invasion of Germany-occupied France.  He had the honor to sit on stage at the Normandy American Cemetery during the official ceremony to commemorate the occasion and had the rare opportunity to shake hands with President Barack Obama.

“We are going to give him what we call the Air Force Exceptional Service Award,” Hoog said. “This is only given to those people who demonstrate exceptional patriotism and service in a civilian capacity.” Gabriel began his career in 1943 as an Army machine gunner. He later separated from the Army and pursued higher education degrees in music education. Gabriel reentered active-duty military service as an Air Force band conductor. After retiring from the Air Force in 1985, he continued his passion for music and mentoring at George Mason University for 10 years. In 1990, Gabriel began serving as the Conductor Emeritus for the Air Force Band and conducted more than 2,000 concerts with global audiences in 22 years. “What an absolutely incredible day, in an incredible venue, with incredible music,” Hoog said. “I couldn’t help but feel the chills in some of the earlier performances.” The award came as a surprise to Gabriel. “To say I’m surprised is an understatement; shocked is better,” Gabriel said. “I am truly honored. “I never thought I’d live to be 90, but then there were days I didn’t think I would live 10 minutes longer,” Gabriel said. Even after 72 years of service, Gabriel continues to serve and support service members from all branches of the military, and shares his love of music with everyone he meets.