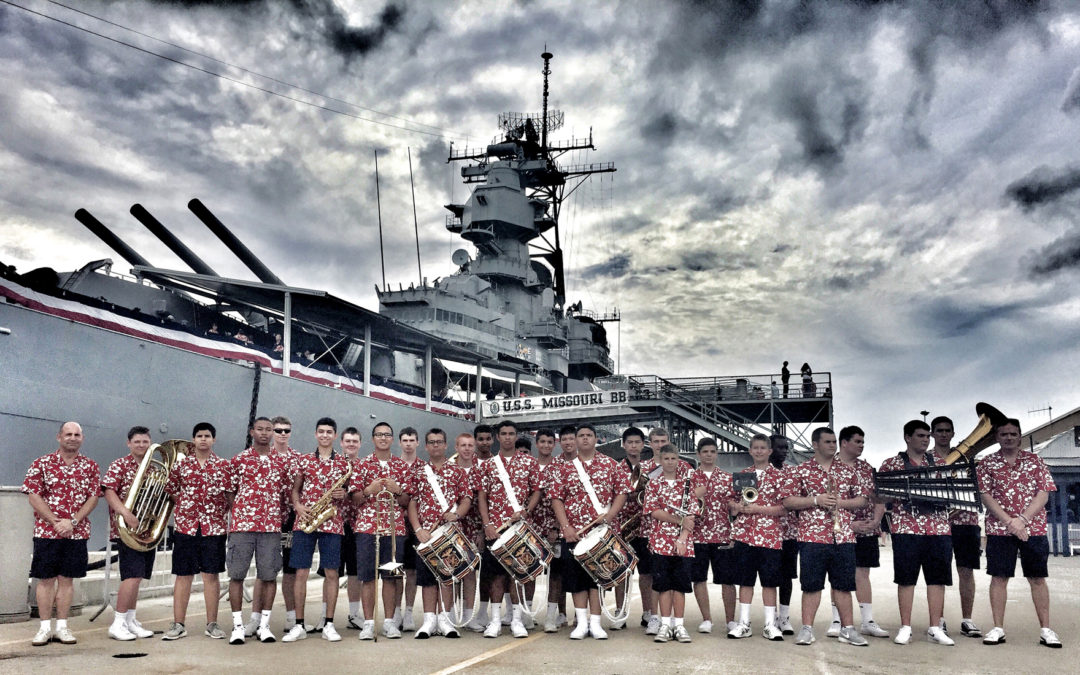 The 75th Anniversary of the attack on Pearl Harbor brought together numerous bands from around the United States to pay tribute to The Greatest Generation and honor the Fallen at Pearl Harbor.  The Missouri Military Academy Fighting Colonels Band were among the participating bands who, as stated by their Director, Freddie Lomas, knew that they were “part of something quite special.”

"The trip was a wonderful experience for our boys to have. The band was over 1,300 in strength so the obvious difficulty was keeping the musicians together. Both I and other band directors were on hand to help with this. Our first note as a Mass Band was incredible; the music director Robert Smith held a tonic chord which when 'cut-off' echoed across Waikiki bouncing off the surrounding buildings. We knew then that we were part of something quite special.   Our first morning was left free to relax and familiarize ourselves with the surroundings, for me this meant taking a group of boys to Waikiki beach (a 30 second walk from our hotel) where we hired surfboards for a few of hours. We were also able to visit some of the famous Hawaii landmarks such as Diamond Head and experience a traditional Luau, where some of our boys joined the girls to dance the Hula!   There are many memories that I will take from the trip. Meeting Pearl Harbor survivors was very special for me personally. My Grandfather, Joe James was a Chief Petty Officer on HMS Repulse when it was sunk on 10 December 1941 in the South China Sea just three days after the Pearl Harbor attack. The same Japanese pilots would have been involved in both attacks. He survived having spent 5 hours in the water.   The visit to the USS Arizona memorial was very moving, I know the boys were touched by this and they were very excited and privileged to meet survivors.   I met a living legend, Col Arnold Gabriel. In World War II, he served as a combat machine gunner with the United States Army's famed 29th Infantry Division in Europe. For his service in Europe he received two Bronze Star medals, the Combat Infantry Badge, and the French Croix de Guerre. Col Gabriel was the Commander and Conductor from the United States Air Force Band, United States Symphony Orchestra, and Singing Sergeants from 1964 to 1985. In 1990 he was named the first Conductor Emeritus of the United States Air Force Band. Col Gabriel was one of the conductors for the event. When I introduced myself as a former Warrant Officer Bandmaster in the Royal Marines his eyes lit up and he immediately asked if I knew Vivian Dunn who he spoke fondly of. Lt Col Sir Francis Vivian Dunn KCV was the Principal Director of Music of the Royal Marines from 1953 to 1968. He was the first British Armed Forces musician to be knighted.   The whole trip was a complete success, our boys were never in any doubt as to why we were there; to remember and celebrate the lives of those who gave so much in order for us to live the lives that we do today. We certainly adopted a 'work hard - play hard' attitude but never far from our minds was 'The Greatest Generation'. This was the theme for the concert and also the title of a new work by Robert Smith, specially commissioned for the 75th anniversary Mass Band event."