At MCI, we understand that gathering funds to organize and execute a concert tour can be a costly endeavor, both on an individual and group basis. Larger ensembles often make for more complicated financial planning, but with more people involved in the process, we find that teamwork often leads to stronger, more successful solutions.

As part of the planning process, our marketing team works with your ensemble to create a strong advertising presence in your community prior to your tour. We also work with local and state government officials to promote prominent representation of your region while performing abroad. We find that this kind of marketing attracts community support on many levels, as well as positive recognition of hard work for everyone involved. The following documents are custom-created for your ensemble, and are provided to you once the marketing process begins.

Once the tour destinations have been established and planning process has begun, we will provide you with a custom press release written by our marketing team outlining details of your tour, including where you are going, your performance venues, details of your sightseeing, and the city and state which you will represent. You can submit this document to be featured in your local newspaper, journal, or online newsletter, which will increase community awareness of your upcoming tour.

As part of the process, we will also provide you with a document to send to your governor requesting state recognition of the days you will be on tour. We have had tremendous success with this type of recognition, especially for groups representing their home states on tours coinciding with national holidays, such as Memorial Day, Independence Day, and famous national anniversaries such as the 75th Anniversary of the outbreak of World War Two.

In an effort to help you with fundraising, we will provide you with a document that tour participants can hand out to prospective financial sponsors. We understand that concert tours can be costly on an individual basis, so we hope that this custom letter can help gather individual support for every participant. Some groups have been enormously successful gathering major contributions from individual sponsors and offering tokens of appreciation in return.

For first-time touring directors who need a hand in the fundraising process, we suggest some of the following methods for getting started. Many of our groups have had tremendous success with their own creative fundraisers!

ASSESS THE UNIQUE RESOURCES of your group. Encourage boosters to know who does what. Capitalize on ‘in-house’ talent and connections when it comes to goods and services as it relates to fundraising. We continually ask directors what fundraisers work best for them and invariably, they respond with ideas where parents and a supportive community are primary factors. For example, one group contracted with an area golf course (owned by a friend of a band parent) to co-sponsor a tournament, which received a tremendous response. One booster parent was an amateur photographer and helped set up a very successful fundraiser for photos with Santa, while another parent who worked for a local discount store helped students set up a gift wrap booth for Christmas. If you’re aware of your group’s resources, you can come up with all kinds of great ideas.

Form a BOOSTER ORGANIZATION.  Designate a group of individuals to address the financial needs of your ensemble, and assign each member a different role. For example, place one person in charge of group fundraising, one for soliciting community or corporate support, and one assigned as the trip chairperson. Specialization often best utilizes a committee.

GROUP VISIBILITY is important. Use every opportunity to promote your program to the public. Keep everyone informed. Announce your performances well in advance, using as many resources as possible.

Establish FUNDRAISING TRADITIONS. Over the years, we’ve all had directors tell us repeatedly that traditional annual fundraisers are very successful because people have come to know and expect them. For example, one school choir has been hosting an annual Renaissance Festival for about eight years, and has gradually collected sets and costumes, and generated tremendous community participation. Another school hosts an annual carnival while another an annual golf tournament. Traditions can take time to develop but often yield tremendous rewards.

Ask for DONATED GOODS AND SERVICES. Don’t be afraid to reach out and ask for help. These relationships tend to be mutually beneficial, as businesses are often rewarded for their good-will and generosity with increased sales! You might offer to advertise for them in a newsletter or acknowledge them publicly at a large concert or function.

Online crowdfunding is an increasingly effective fundraising tool for arts organizations everywhere. Though there are a variety of crowdfunding sites currently online, Kickstarter, GoFundMe, and Snap! are three of the most popular sites used by groups and individuals worldwide. Kickstarter projects function through incentive-based contributions. For example, if a musical group is raising funds for a recording project, patrons can contribute any amount of money, and receive something from the group in return, such as a CD recording or a t-shirt, depending on how much they contribute. GoFundMe operates similarly, though there are no incentives offered through the website. Users of this site, however, are welcome to provide contributors with their own tokens of appreciation. Snap! is a social donation platform that allows you to fundraise utilizing email, social media, and SMS to your potential supporters. With online advertising and social media presence on the rise, any of these websites could be fantastic tools for concert tour fundraising and making people aware of group travel aspirations.

Organizing a large-scale event such as a dinner, an auction, or an ice cream social can help attract all kinds of supporters contributing in different ways. We have even had groups combine fundraising activities to attract all kinds of contributors. In most cases, people want to help, and these are great way to get them started.

What Others Have Done

Our groups have taken on a variety of fundraising projects from minimal to ambitious. For example, some of our recent groups presented benefit concerts to raise money for the upcoming tours, as well as raffles, online crowdfunding, and made use of our sponsorship letters. We find that most groups have great success with their own fundraisers, depending on the level of involvement.

Here are some examples of recent fundraising successes:

“Our most successful fundraisers are all performance related. We have several churches in the area that allow us to sing during their worship services, or do concerts in their churches for a free-will offering. Some have a budget for guest choirs as well. We also learned several barbershop quartet style arrangements of valentine songs and sold them for $25. We also use the profit from our annual Renaissance feast. We also do traditional fundraiser company sales of candy, candles, and other products, but make the most money on the performance-related ones.”

“We did sell food at a basketball game that we knew would be well attended and that our students sang the Star Spangled Banner. We also do a one night fundraiser called Spaghetti and Serenades that we have put on for many years. Students/families bring food for a big pasta dinner and wait tables and serve to the audience. Students from the choir perform solos, duets, and small group performances for about an hour. It is a mix of opera, musical theatre, pop music. It’s fairly easy to put together and all profit as families donate supplies and food.” 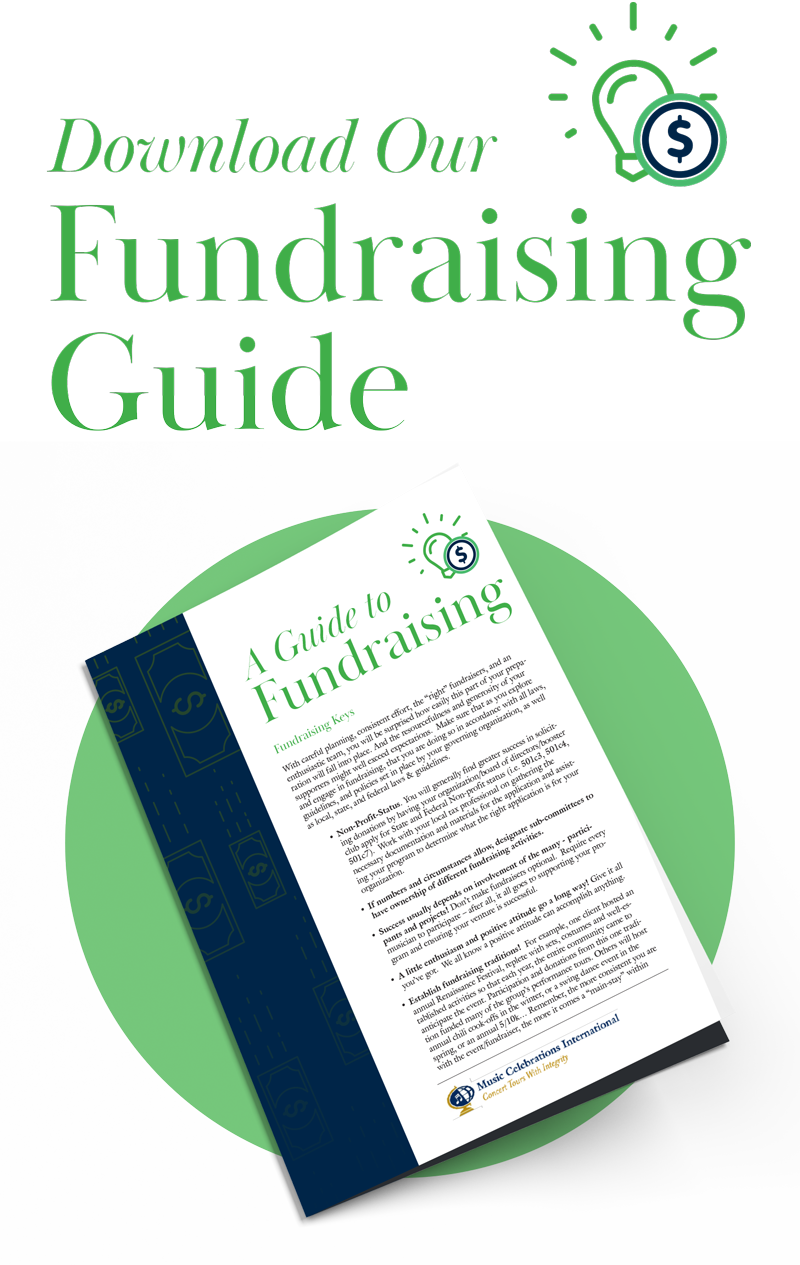