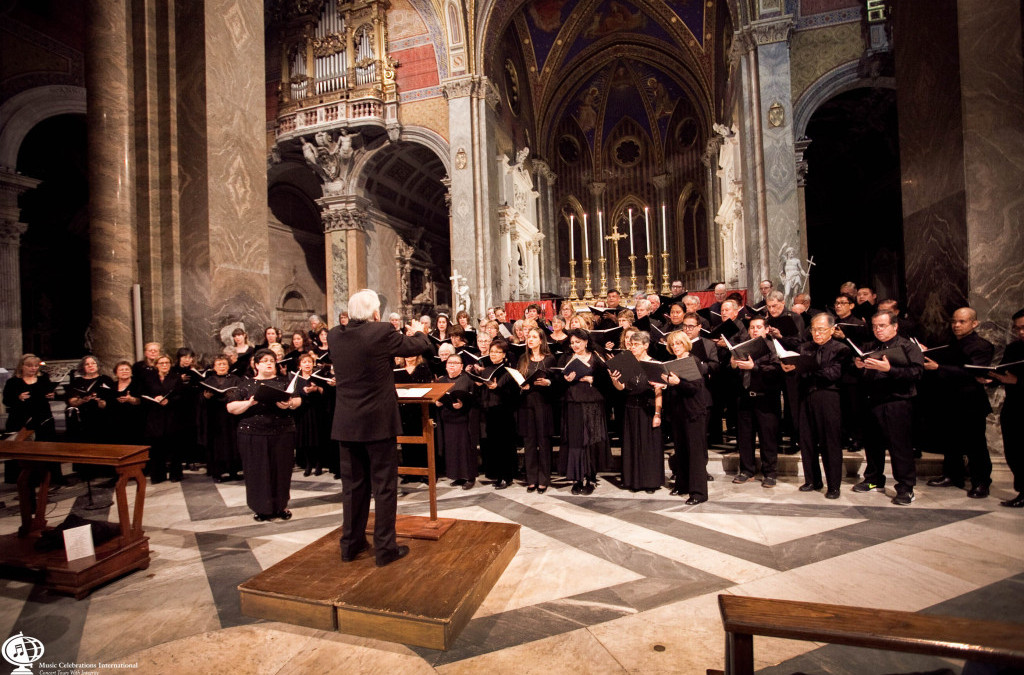 During the week of December 5-10, 2015, four talented, passionate, and dedicated Catholic Choirs from across the United States traveled to Rome to celebrate the 50th anniversary or the Second Vatican Council. This historic event - where 2,500 bishops, 1,000 reporters, and observers from around the world, gathered at St. Peter’s Basilica to discern the Church’s role in the modern world - was referred to as “the greatest religious event of the 20th century” by John Paul II.  As momentous as this occasion was in and of itself, it was made more significant by Pope Francis announcing the start of an Extraordinary Jubilee Year of Mercy at the exact same time of our Festival of Faith. We could not have asked for a greater blessing or experience. The four choirs gathered and met for the first time for rehearsal at Santa Maria sopra Minerva Basilica, the only remaining Gothic church in Rome. Brought together through ties both musical and spiritual, we could tell immediately that this was going to be an incredibly special experience. The mass choir rehearsed with Monsignor Pablo Colino, Conductor Emeritus of the Vatican Choir, whose skills in bringing out the best in any choir are truly unparalleled. Differences in language held no barrier for this conductor and his choir, and within an hour and a half they were ready to sing mass at The Vatican.

The mass choir performed four pieces: Ave Maria by Tomas Luis de Victoria, Alma Redemptoris Mater by Giovanni Pierluigi da Palestrina, Locus Iste by Anton Bruckner, and the beloved Ave Verum Corpus by Wolfgang Amadeus Mozart, all accompanied by one of The Vatican’s prodigious organists. Knowing that Pope Francis was just outside giving a Papal Blessing to a massive audience added another level of significance to this mass, and it truly was an amazing manifestation of great faith and love of music. In addition to performing at The Vatican the four choirs were also able to attend mass the next day for the opening of The Extraordinary Jubilee Year of Mercy, which happened to coincide with The Feast of the Immaculate Conception. They received a special blessing that day in the form of two Popes together: Pope Francis and Pope Emeritus Benedict XVI. Nothing could have given the choirs better motivation to perform a stellar performance that same evening. The Festival of Faith Gala Concert at Santa Maria sopra Minerva Basilica opened with the Holy Spirit Catholic Church Choir from Fresno, California, St. Thomas More Catholic Church Choir from San Francisco, California, and St. Martin de Porres Catholic Church Choir from Yorba Linda, California, each performing individual selections.

They were all then joined by Queen of the Apostles Catholic Church Choir from Belmont, North Carolina to form the mass Festival Choir and perform their four selections once more to a full house (standing room only!). The acoustics, atmosphere, music and experience were all divine, celebrating both the historic event and each individual’s deep faith.

Everyone departed the concert knowing we had all just witnessed a once in a lifetime experience, enveloping the Opening Message to Humanity from the Second Vatican Council: “That in the midst of this world, there may radiate the light of our great hope in Jesus Christ, our only Savior.”